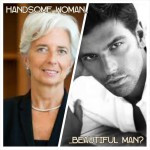 When describing physical appearance, it is normal to describe a girl as beautiful and a man as handsome.
Is it correct to call a man beautiful, and if so, when?
Is it possible to call a woman handsome?

It is acceptable with a woman, especially an older woman, to refer to her as a handsome woman, but you would never approach any woman and say directly to her, “You are handsome!”. This is used only when talking to a third person or when describing a woman in a novel.
Younger women may be offended if you say they are handsome, so, if you wish to pay a compliment to a woman but you don’t want to suggest deeper feelings, say that she is attractive!

If a heterosexual man looks at another man and says in all sincerity, “You are beautiful!”, that is the moment the universe will implode!

1. “Handsome” can be attributed not only to a male, but also to a female. It is used in the case of an elegant older woman. You can describe an older woman as “handsome”, when talking to someone else.

2. If you say to a woman that she is “handsome”, she will be offended!

4. If you are a man, and you say to another man that he is beautiful, he will be offended.